What is the best CPU for a powerful desktop music workstation

The computer hardware market is constantly changing and so is the software.
Fortunately we are living in a time where hardware performance is increasing faster than the software demand when it comes to digital audio workstation software. Whether you run Cubase, Logic Pro, Ableton live, or FL the CPU is the heart of the workstation and driving/limiting your creativity.

CPU is short for central processing unit and is the electrical component that runs the software.

Is it time to upgrade your DAW with a new CPU and will it actually make a difference?

What to look for when upgrading your CPU

CPU specifications might seem like nonsense but it is not that hard to get the basics before you purchase the wrong central processing unit. Check out some CPU benchmarks

You can run your own benchmark on CPU userbenchmark website. Download a file and start it to participate in collecting anonymous statistical results.

The important parameters are:

How to read the CPU specifications 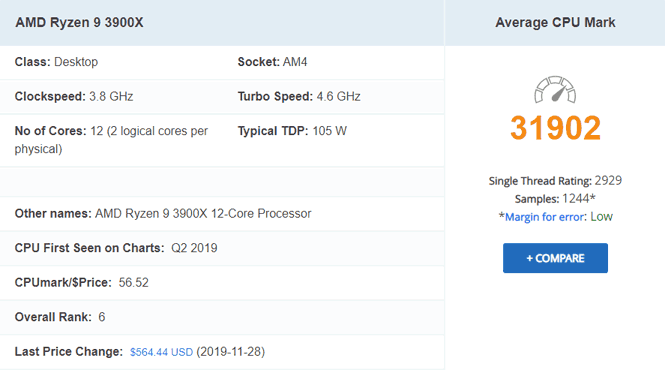 The most important specifications on the Ryzen 3900X in the chart above are:

Since all new CPUs have 8+ Cores the best CPU is probably one with a high Single-Core Rating and might be found at the top of this list. The best price/performance is usually a little down the CPU benchmark list. 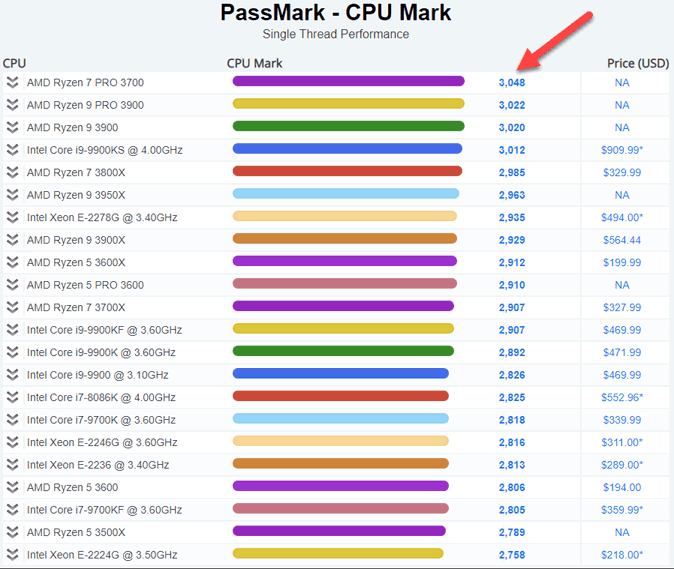 Best CPU for music production?. Passmark Single Thread Rating CPU chart. The red arrow marks the score.
The number of samples is shown as a reference when you click on it.

The best is off cause lots of fast cores but if you use many software instruments and heavy plugins Single Thread Rating is important.

For many years Intel has been ahead of AMD with the best CPU's making faster and more reliable CPUs. Recently AMD has made a lot of progress and even overrun Intel on Core count.

For some time the Intel I9 9900K has been a good choice for digital audio workstations and still is. There is a new 9900KS model with slightly better performance. 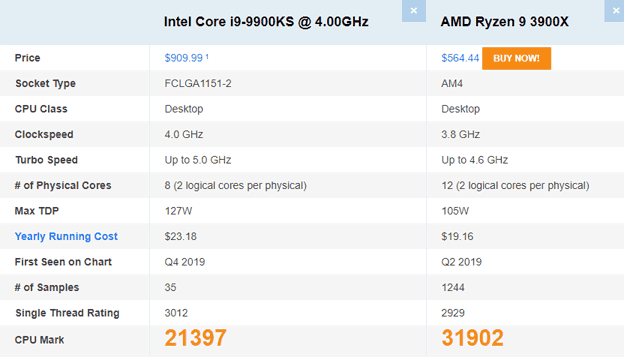 CPU Mark is a relative benchmark score that can be compared between CPUs listed in the chart. The 3900X scores over 10.000 points more than the 9900KS but that does not take core rating in account.

Though AMD is closing the gap The 9900KS til has slightly better core rating compared to the 3900X model but the AMD Pro 3900 beats even 9900KS.

For crunching heavy plugins 9900KS is slightly better but the 3900X has 10.000 extra points from the 4 extra cores for a higher track count in your production projects. If you are struggling with UH-e Diva or Repro the 9900KS is your choice.

Dawbench.com has templates and software made for DAW benchmarking with your music software.

If you have an older central processing unit that scores around 8000 to 12000 points in this CPU list you might benefit from a CPU upgrade but it probably also goes for Motherboard, Cooler, and RAM.

New CPUs are launched every quarter and this article will be updated along to keep it updated as much as possible.

Moore's law is a theory by Gordon Moore that predicts microchip development. The law states that the number of transistors in a processor doubles every 2 years.

The number of transistors on a CPU has developed from a few thousand in 1971 to over 7 billion on an intel i9 processor and it will probably continue for some years. It clearly can not continue for the next 30 years.

Music software has also developed according to Moore's Law from pure midi in Cubase in the 80´s to full digital workstations with audio processing quality at a fraction of the price. Today entry-level users get more processing power than only professionals had earlier.